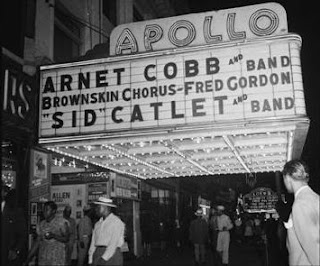 The Apollo Theater celebrates their 75th anniversary. In November 1934 when The Apollo Amateur night was barely a year old when a young girl name Ella Fitzgerald stepped on the stage. She was only 17 and was originally suppose to go on as a dancer until she saw the dance group before her. Ella started to sing Hoagy Carmichael's "Judy" and the crowd started to boo but when she was done they were yelling "Encore"

In 1988 a young girl by the name of Lauryn Hill stepped on the stage at 13 singing The Jackson Five's "Who's Loving You". She started out shaky but at the end of the song the audience was loving her.

In 1998 another young girl by the name of Jazmine Sullivan stepped on that same stage that gave birth to Ella Fitzgeral, Lauryn Hill, James Brown, The Jackson 5, Patti Labelle and so many other legends. At the age of 11 she sang "Accept What God Allows" and a star was born.

Posted by afreshmusic at 4:06 AM