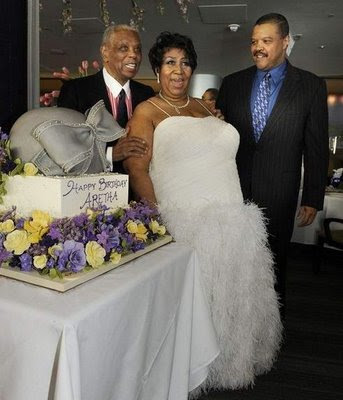 Now we know another thing about the wonderful Queen of Soul besides her age (67!). We now know she can party like no other!

To celebrate her 67 years on the planet, Franklin threw a party for 200 friends at Seldom Blues Saturday and the centerpiece was a cake that was a replica of her stylish gray-bowed chapeau, made out of yellow cake with buttercream frosting and fresh raspberries.

Guests dined on chef Jerry Nottage's famed gumbo, as well as on meat loaf prepared from one of Franklin's own recipes.

Entertaining the guests was President Obama impersonator Iman Crosson, famous for rapping and dancing as the president on youtube, and soul singer Kenny Lattimore, who did a special "President Obama" remix of his song "Something." The plus-sized trio Secret Trois and Raheem Devaughn also appeared.

The birthday cake/hat was designed by cake designer to the stars, Sylvia Weinstock of New York. Weinstock also made tiny replicas of the hat cake, wrapped in a six-inch gift box that each partygoer received as a gift from Franklin. 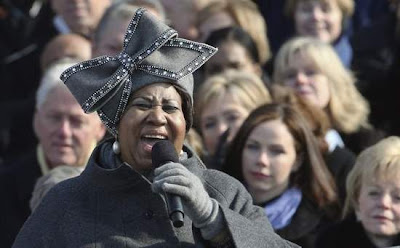 Posted by afreshmusic at 4:50 PM