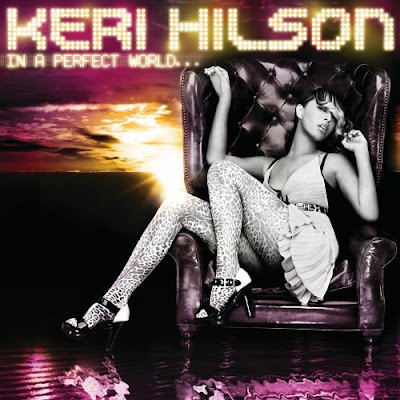 Keri "Miss Keri Baby" Hilson released her new album March 24, 2009 also known as yesterday. After several delays "In A Perfect World" has been released and I wish they would have held it just a little longer. After the smoke and mirrors of decent to solid singles and don't forget the little dust of drama, the album really just falls flat. There is nothing special about "In A Perfect World" and you don't even get the remix of "Turning Me On" you know the one that made me like her. "You need to move to the left", with this out put she actually proved that she may need to step to the left because this is a below average attempt.

Track 7 "Make Love" is a great song but it seems like after that precious gem #7 everything just falls off. Not that things were so far up anyway. For me the biggest dissapointment came from track 11 "Tell Him the truth". It starts like it was going to be my new shit but when she gets to "tell him the truth" I lost all interest. "Tell Him the truth" had potential of a good song but instead it seems unfinish and sounds like a rejected Beyonce track. My favorite other than the already released singles: "Make Love" and "Turning Me On" is "Slow Dance". However, it does sound like a Beyonce song but it is sung much better.

The verdict is C- below average Miss Keri Baby needed to come harder especially after shooting the sheriff. That's some shit when you shoot the sheriff and still not the chosen one to take over; You're still stuck at being Barney Fife. In a perfect world this would have been a better CD. Sorry Keri Baby.