YOU NEED TO KNOW MELANIE FIONA 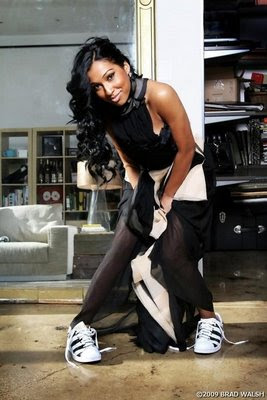 I already have Melanie Fiona as a Spotlight Artist on TheFreshMusicPage but now I am officially calling her as the next "it" girl. I called Jazmine Sullivan two years ago and if my ear, eyes and gut feeling didn't fell me then. Well, it's time for me to be cocky and pop my collar Kanye West style and say that Melanie will be the same hot thing in R&B actually I'm going to go even farther because I think Jazmine still isn't getting the recognition she deserves, but Melanie Fiona will be even bigger!

As long as Melanie keep being herself, she will be the new 'shit' that everyone will be playing and talking about. I don't what more can I say but I'm diggin' her. She has the voice and I love that she's in touch with that old school Rhythm and Blues. She's already been on Carson Daley but that is just a drop in the bucket for her. She doesn't even have a album out just a song (Give it to Me Right) and she's already on late night tv. Melanie is the artist that I'm currently watching out for.

Posted by afreshmusic at 6:40 AM