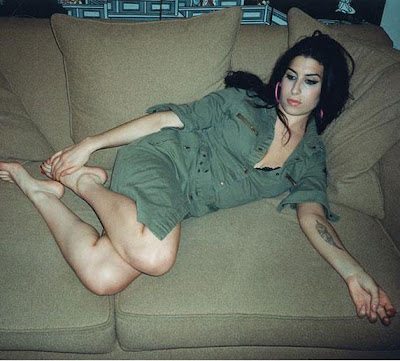 British singer Amy Winehouse was hospitalized for "dehydration" on Friday in St. Lucia, according to a report from E! Online.

Her spokesman confirmed that the 25 year old songstress spent the night in the hospital after fainting at her Caribbean home, after “running around” with a group of children and failing to drink enough water. (YEAH RIGHT SURE IT WAS THE RUNNING AND NOT THE SMOKING OF CRACK)

Recently, Winehouse won a court victory against the paparazzi for snapping photos outside of her north London home.

According to the anti-harassment injunction, which is currently hanging outside of Winehouse’s home in Enfield, states that photographers are not allowed to follow or approach her within 100 yards of her house.

The “Rehab” star will be headlining the 18th Annual St. Lucia Jazz festival next week, with KC and the Sunshine Band opening for her.

Others that are expected to perform at the event include Patti LaBelle, Chaka Khan, Chicago, and Michael McDonald.
Posted by afreshmusic at 4:56 PM