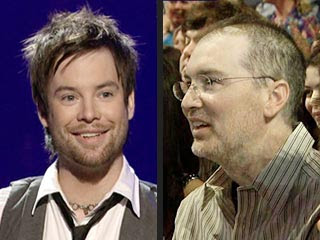 The older brother of American Idol Champion David Cook has lost his battle with brain cancer, according to the singers official website.

Adam Cook, 36 was a lawyer and battled with the disease for 11 years before losing his fight with the illness. He leaves behind his wife and children.

David made the announcement Sunday morning at the 12th Annual Race for Hope 5K run/walk in Washington, D.C. benefiting finding a cure for brain cancer. The "Light On" rocker was the event's honorary chairman and his team raised more the $97,000 for the cause.

The brothers had one of AI's most memorable, tear-worthy moments ever, when Adam sat in the audience as Adam sang Mariah Carey's "Always Be My Baby" (April 2008).

Residents of their hometown in Terre Haute, Indiana, raised $45,000 so that Adam could be flown in with the proper medical care.
Posted by afreshmusic at 4:43 PM