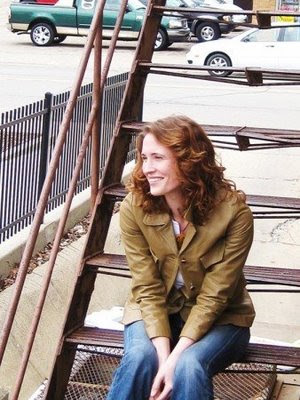 This is the first time the Morning Cup of Soul is also a relatively new artist. Emily Hurd reminds me of a combination of Janis Joplin and Carol King. I don't know exactly how to explain it but her voice hits you like a dagger to your soul. Her voice raw but tamed yet it pierces the deep inner workings of ones self.

I know that's a lot to say about someone without a deal with a major record label or a hit record. I'm never one to compare someone to legends but there is no one out today that can mess with this ladies unless I name: Joplin, King, Carly Simon, Marcia Ball or Bonnie Raitt.

A native of Rockford, Illinois, Hurd has been touring her native midwest and both coasts of the U.S. for years. Well-traveled and well-versed, she is the quintessential indie national act, performing for growing pockets of loyal followers who revel in her clever rhymes and honest performance style.

Backed by a band, Hurd blasts through her tunes with Joplinesque soul. She has shared the stage with Bettye Lavette, Ozomatli, and Irma Thomas, to name a few. On her own, she candidly roots her audience into her storytelling and storyselling, and has opened as a solo act for the likes of Roger McGuinn and Geoff Muldaur. bio

Posted by afreshmusic at 5:20 AM