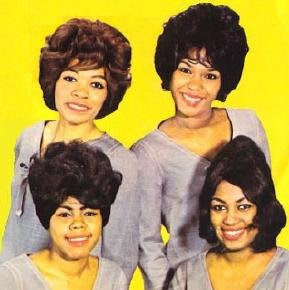 I woke up and this song popped into my head: "Foolish Little Girl". Some would say how odd but not if you do everything to music like I do. I don't love music, I live music.
The Shirelles were the first major Female vocal group in the Rock and Roll era. They defined the "girl group" sound: with their sweet harmonies and lush instrumental backings.

The legendary vocal group Shirelles achieved so much crossover success that they were the first to headline an interracial concert in Alabama.

"Foolish Little Girl" reached #4 on the pop charts and #9 on the R&B charts. That just shows how popular they were because usually a black group would perform better on the R&B charts than on the Pop charts.

Random Fact: The Shirelles gave a young Dionne Warwick some of her first experience on a large stage. She would sometimes sub in on concert for some of the members when they took a leave.
Posted by afreshmusic at 7:15 AM