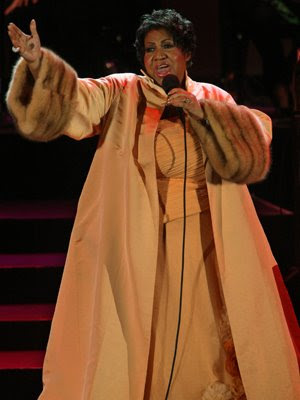 The legendary lady of soul, The Queen of Soul, Aretha Franklin was in concert at the Hollywood Bowl. A list guest were also in attendance: Halle Berry, Billy Dee Williams, Angela Bassett and close personal friend Rev. Jesse Jackson (who was in town to help the grieving Jackson Family).

While there were lots of fun and knowing Aretha's sense of humor, I'm sure many of laughs too. Aretha paused to say a few words about the late King of Pop, Michael Jackson. Calling him a “musical genius” who was “very kind and sensitive” before asking for a moment of silence. She continued: “Thank you, Michael, for every moment, for every kind thing you did,” she said, adding that “he moved on up, just a little bit higher now.”

That my friends is a regal stamp of approval. Read the excellent review of the Concert Here
Posted by afreshmusic at 11:54 PM