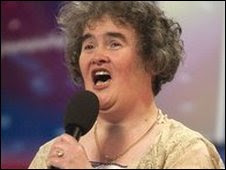 Singer Susan Boyle of Britains Got Talent, who became a internet sensation and even was featured on this very website was hospitalized following a tumultuous week in which some doubted whether she would even make it to Saturday night's finale due to the pressures of instant fame. Susan Boyle was reportedly admitted to a mental-health clinic after suffering an "emotional breakdown."

The British tabloid the Daily Mail reported on Sunday (May 31) that Boyle was admitted to the Priory Clinic — a mental-health hospital — after suffering from exhaustion in the wake of her second-place finish on the show. The newspaper claimed that police were summoned to the singer's hotel and she was assessed under the Mental Health Act following what was described as a breakdown after her surprise second-place finish behind dance troupe Diversity.

On Sunday, it emerged Boyle was taking time off on the advice of a doctor.

"She has been seen by her private GP who supports her decision to take a few days out for rest and recovery."

"We offer her our ongoing support and wish her a speedy recovery."

The singer became an international singing sensation after first performing "I Dreamed A Dream" in the contest, a song she reprised for the final.

Her performances have attracted millions of hits on video-sharing websites and led to an appearance on the Oprah Winfrey show.

As always in events like these TheFreshMusicPage.com thoughts and prayers are with Ms. Boyle and we are hoping for a speedy recovery.