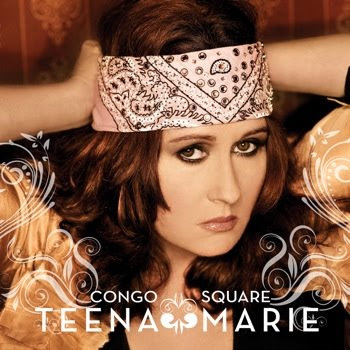 When Teena Marie went to work on her next album she found herself in control. Producing, writing and arrangements of the horn and rhythm arrangements of her band and all backing vocals. That same year Lady T appeared on Rick James "Street Songs" album for the classic duet "Fire & Desire". The hits kept coming until 1990 when she musically dropped off the planet due to her dispute with Epic Records.

In 1994 we saw her return but only with an independent release "Passion Play" that went unnoticed because of the lack of backing from a major record label. Lady T would drop off the planet again but this time it would be for a decade!

The year 2004 we saw the legend return in rare form. Releasing "LaDona" on the Ca$h Money Classics Sub-label. That odd pairing of a soul legend and a hip-hop label brought a gold album and the highest charting album of Teena's career. She followed that up with a 2006 release "Saaphire" spawning a Top 40 single "Ooh Wee".

The musical Diva that is Teena Marie is back yet again with "Congo Square" on the legendary Stax label (revived by the Concord record label). She's already found success with the single "Can't Last A Day" a duet with modern soul singer Faith Evans. This album also teams her up with Howard Hewitt on a beautiful duet "Lovers Lane". Possibly one of my favorite songs on the disc. Their voice match as well as Lady T with Rick James but with a much different feeling. Howard Hewitt easily slips into that falsetto and it compliments Teena Marie's birdlike voice. Lady T gets Jazzy on the title track "Congo Square" with Jazz master George Duke on Piano. Shirley Murdock and MC Lyte also makes appearances on the album (on different tracks).

The album has an overall good feel to it, with nothing forced. This is not an older artist trying to fit in with what is popular but this is an artist that is making music. One thing about buying a Teena Marie album is you know what you are getting. That is quality music over quanity and over trends of music. That's not to say that Lady T isn't up to date because she is. Let us not forget Teena Marie was rapping on "Square Biz" before Lil Kim or even JayZ picked up a mic!