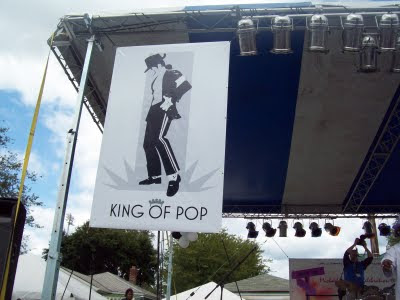 Michael Jackson the world renowned singer, producer, dancer and humanitarian. He was also a brother, son and most of all a father. He was the greatest entertainer to ever walk this earth. His music legacy will be one of greatness: marked with awards and accolades. An estate that will make millions possibly billions and rival Elvis Presley and the Beatles.

While most of the nation have moved their attention towards recent passing of DJ AM and Senator Ted Kennedy, there is a dedicated music base that is still focus on the legacy of the King of Pop Michael Jackson. August 29, 2009 would have marked Michael Jackson’s 51st birthday.
Today much of the media has ignored Michael’s birthday in order to cover Sen. Kennedy’s funeral. However, at the childhood home of Michael Jackson something special was happening. Hundreds of people gathered around a big stage, singing, dancing and enjoying Michael’s music: In front of that small wooden house that the Jackson family called home. That same home where Michael would watch James Brown and Jackie Wilson perform. I’m sure he would dance along studying the moves of his idols, never imaging that children would one day stand outside his home and try to duplicate his legendary dance steps. 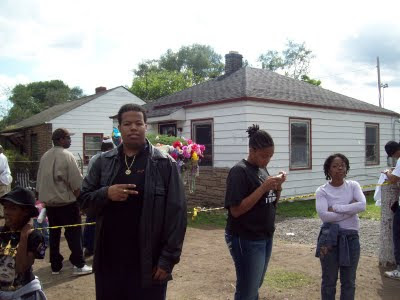 It was classic Midwest weather, a crisp 70 degrees that called for a jacket. A few chose that special leather (possibly “leather like”) jacket. The classic “Thriller” jacket with the many zippers and you couldn’t tell a soul that wore it they were not the shit! At 2300 Jackson Street Michael was still the Michael at his peak. The same man that moon walked into the hearts of many. Not exactly the same man because Gary, Indiana has a longer history with him. They were huge supporters along with the rest of the Midwest of The Jackson Five even before Motown records made them superstars. When they release the singles of “Big Boy” and “Going Back to Indiana”, they became superstars of the Midwest. That’s what made celebrating Michael Jackson’s birthday special. You were around people that loved him before he had the world’s attention and after the world had turned their backs. 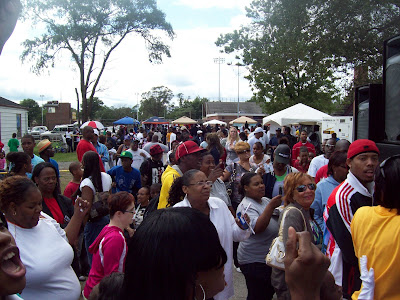 Don’t get me wrong everything wasn’t a dreamland. You can tell that Gary, Indiana is a struggling city. Many run down houses fill the blocks of what once was a moving little city. They’ve experience an economic slump possibly 20 years before the rest of the nation. Even the block of the Jackson family looked as if it could be a ghost town. 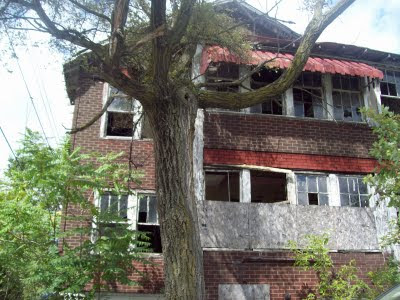 There were many characters. A man dressed in Arabian wear but I’m sure he was just a nut. Several Michael Jackson impersonators and one I promise you were 60+ but he happily posed for pictures (I took a pass). I even saw a lady with bright red and blue hair (I missed a great photo opportunity because of my shock). 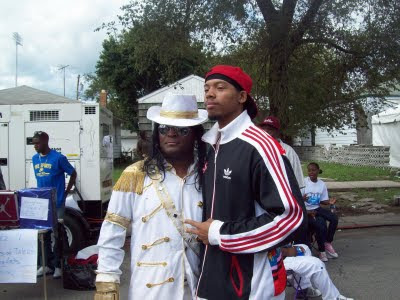 There were a special treat when Keith Jackson and his band which included the original keyboardist of The Jackson Five started to play classic Michael Jackson songs. Casper from the “Casper Slide” fame was also in attendance and did most of the MCing. The mayor of Gary, Indiana, Rudy also walked among the crowd which was an odd thing. I could never imagine Mayor Daley of Chicago walking among hundreds of people so comfortably. While I was leaving after a warning from the shoe shine guy (Yes it was a shoe shine guy! There were also a barber cutting hair outside!) back to the shoe shine guy warning. He promised me that they will soon start robbing people. If you can't trust a local shoe shine guy, I don't know who you can trust. While I was leaving Jermaine Jackson was on the phone thanking everyone for their support. 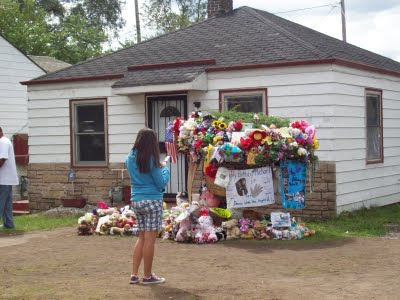 *VIDEOS & MORE PICTURES TO COME*
Posted by afreshmusic at 8:54 PM