RETURN OF THE DIVA 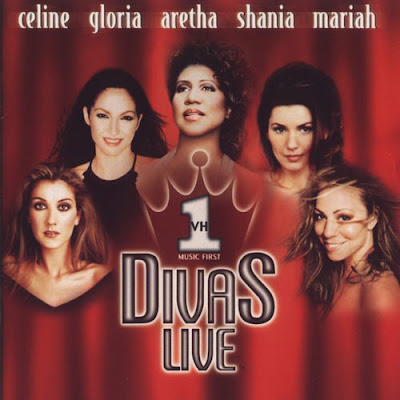 With new albums from Whitney Houston, Madonna and Mariah Carey. Some have dub this music year as "The Year of The Diva". They might be on to something because VH1 has decided to bring back their popular program: VH1 Diva's Live.

The very first Diva's Live event had Mega Stars of music. Aretha Franklin, Mariah Carey, Gloria Estefan, Celine Dion, Shania Twain and Carol King. 1998 was the year of the Diva indeed. I'm bias when saying this but Aretha Franklin ruled the day. Showing she could hang with younger Diva Mariah Carey by literally blowing her out the water when they made "Chain of Fools" a duet. However, Celine Dion attempted to go toe to toe with the mighty Queen of Soul but only to to be left in the dust by Aretha's magnificent talent. It made for GREAT television.

However, I'm afraid this new lineup of "Diva's" isn't that dynamic. They are mostly Diva's in training. Diva's in training show? Miley Cyrus, Adele, Leona Lewis, Jordin Sparks and Kelly Clarkson has been announced so far.

I would love to see Mary J. Blige return because she's a full fledge Diva now. Let's be real Beyonce is a Diva. She's larger than life on stage and has the ability to demand respect, get called a bitch by everyone around her yet still sell millions of albums. I'm sure we all would love to see Whitney Houston on that stage, showing Leona Lewis how it is really done.

However, I'm sure Whitney won't be returning to the Diva's stage anytime soon. Clive Davis is very protective on the appearances Whitney is making these days.

On the plus side Paula Abdul has been booked as the Host of this new Diva's Live. Paula Abdul has earned the right to be called Diva. While she's not half the vocalist of Whitney, Aretha or Mariah she was a hell of a performer in her career peak. Not to mention her great comeback as host of the top rated show American Idol.

For more info on visit Diva's Live official website.
Posted by afreshmusic at 11:58 AM