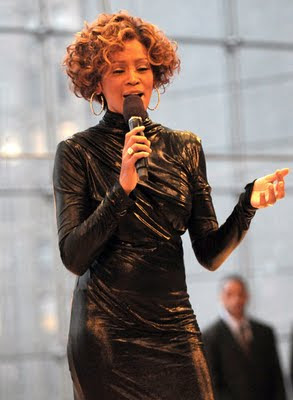 Of course here at The Fresh Music Page, we are looking forward to Whitney Houston comeback album "I Look To You". Which release date has been moved up by one day (AUGUST 31, 2009). I heard because she wants to be considered for this year Grammys and other music related awards. She is of course the most awarded artist ever! Whitney has a total of 411 awards! Yeah, who can touch that? Technically none but not many is coming close.
WHITNEY IS NOT A MORNING PERSON. For ABC Good Morning America fall concert, Whitney won't be performing live. I'm guessing 7:30 am was just way to early for Ms. Houston. Shit, I can't blame her...I heard the Queen of Soul Aretha Franklin once say "My voice hasn't even woke up yet". The Diva's don't like the mornings but most of the time you just have to deal with them. However, when you are a ICON -- Whitney! you can do whatever you want. Therefore, Whitney will pre-record the concert a day before. I'm sure she will actually be singing live because good or bad, Whitney has always sang live. No Lyp-synching from our girl Nippy.
Posted by afreshmusic at 4:04 PM