Kanye West and his Crackhead Moves at the VMA'S 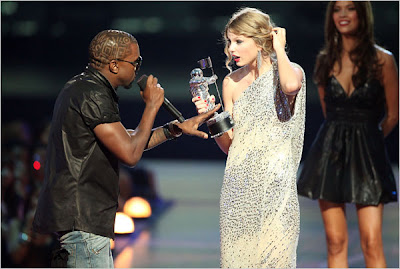 Ok breaking news!!! Kanye is ignorant! Oh wait that is not breaking news because we already knew this. At the VMA’s (Video Music Awards) Kanye West jumps on stage while Taylor Swift is giving her acceptance speech. Kanye disrespects Taylor Swift and goes on a rant on how Beyonce deserved the award.

Will someone tell Kanye that the VMA’s is not a democracy? Nobody cares what you think because you are not a voter and Kanye I hate to break it to you but you are also not of any importance.

When I saw Kanye jump on the stage, I thought to myself “CRACKHEAD!” Kanye West is making those Frankie and Neffe type moves. Anyone that approves of Kanye actions at the Video Music Awards has to be just as ignorant as he is. There is a time and place to voice your opinions. Jumping on stage and disrespecting another artist because things didn’t go your way is not the way.

Kudos to Beyonce for being very classy when she accepted the award for video of the year, bringing up Taylor Swift so she could finish her acceptance speech was extremely classy. I still don’t like your music Beyonce but you showed pure class and I’m diggin’ that.

By the way Kanye West was asked to leave the award show. He apologized and blamed it on being drunk....