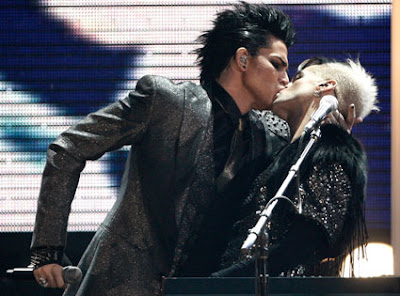 Yes That is Adam Lambert kissing another man... 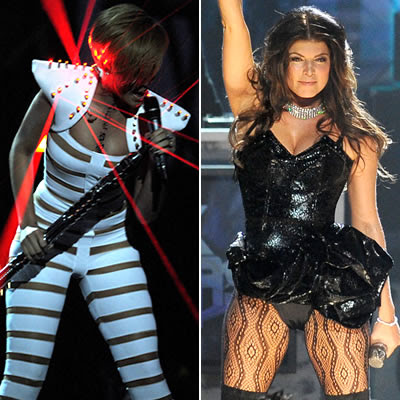 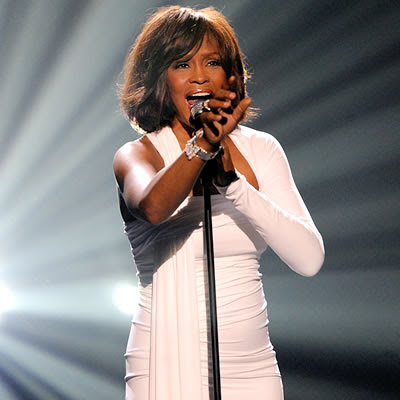 Knows her own strength Diva Whitney Houston
Don’t drink the Kool Aid that most blogs and “Pop Culture” journalists are trying to serve you. The worse performance of the night was Rihanna. First the song is very dark and scary. Her singing resembled more of a wounded cat. Nothing was good about her performance and it confuses me that anyone would write otherwise. They are saying this is Rihanna’s “comeback” but where have they been because Rihanna has never left. She’s been the talk of the “town” so to speak. She’s had an interview which I believe aired not once but twice. Performance Grade F

The Black Eyed Peas performed what would have been a solid performance if it wasn't for vocalist Fergie weak and tired vocals. It was hard to watch and listen because I felt so uncomfortable for Fergie. Which is a big surprise since she use to be known for being able to actually sing. YIKES! Performance Grade C-
Adam Lambert performance was not good. He fell on his ass and rolled around. He did his signature screams that was worse than anything I’ve ever heard. It was billed as a “sexy” performance but nothing was sexy about it. A man in more makeup than any of the Diva’s of the night, prancing around the stage and screaming at the top of his lungs. Adam Lambert is nothing but the twilight version of Clay Aiken. Performance Grade D-
Janet Jackson started the show out and danced her 43 year old ass off. One thing I know for sure, the Jackson family ages well. Unfortunately Janet played it way too safe with her clothes. A brown futuristic brown suit, I guess you could call it. It was boring and she was absolutely avoiding another national television nipple slip. Performance Grade B

Jennifer Lopez fell but got up fast. However, the most entertaining was the fall. What a bore Jennifer Lopez has turned out to be. Is it me or is she starting to look like her husband Marc Anthony? YIKES! Performance Grade D

Mary J Blige had an understated performance but it proved to be one of the best performances of the night. Her vocals were solid and she just had the command of the stage as only a veteran Soul Diva can. I must comment on Mary J Blige solid vocals again. She obviously hired an excellent vocal coach! I never considered Mary J. a true vocalist but she is proving to be one hell of a Soul Diva. Performance Grade A

Lady Gaga had one of the most interesting performances that I’ve seen in a long time. Over the top, psycho and a piano on fire. This broad is nuts and I love it! She captured everyone’s attention. She stands out the most of the night. Performance Grade A+

The Diva, the Legend, the comeback Queen, the Voice, Whitney Houston. Whitney delivered her ballad “I Didn’t Know My Own Strength” to a standing ovation. Marking a true victory, with a slightly rushed but solid performance. The 46 year old Million Dollar Bill Diva looked gorgeous and sounded both confident and strong. Performance Grade A-
Kelly Clarkson performed and was solid but she didn’t totally rock out like I wish she was and therefore she was actually a bit of a disappointment to me. She was just way to safe but with killer soulful vocals. Dear Kelly, can you please make more R&B type songs like you did on the first album “Thankful”. Performance Grade C+

Carrie Underwood another American Idol alum performed but fell flat. Carrie is too cute to pull off the “Sex Kitten” look and just looked silly. It seemed like she was trying to be the Country Music Beyonce. Instead of the girl next door who also has the voice of an angel that we have all come to love. Performance Grade C-

I love Alicia Keys but I am tired of seeing/hearing Jay-Z featuring Alicia Keys “New York State of Mind”. With that said they also delivered a solid performance but they were damn near forgettable and I even almost forgot about them in this post. I would like to note that I am happy that the 40 year old rapper Jay-Z finally found a suit that fits. It usually looks like he’s playing dress up in his Dad’s clothes (meaning suits that are too big). He was dressed like a gentleman for once. Performance Grade B

Alicia Keys also performed solo and she attempted to dance. Memo to Alicia Keys, Soul Diva’s are not expected to dance. Just stand there and let that voice shine. Performance Grade C+
Shakira also performed what looked like she had been spending time on a black college. Maybe she's planning on joining the AKA or Delta sorority? Performance Grade C-
Posted by afreshmusic at 2:29 AM