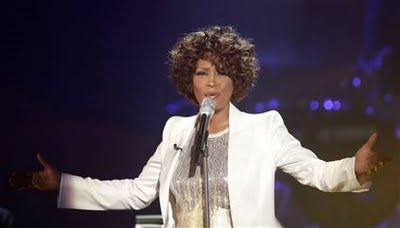 The Diva, The Legend, The Voice: Whitney Houston is in need of serious voice lessons. It is so hard for me to criticize such a vocal legend but it was very obvious on the Dancing with the Stars Finale. On the American Music Awards she proved that she could deliver a ballad although it was slightly rushed. We got to see that there are still parts of “The Voice” left. However, her performance on Dancing with the Stars damn near brought tears to my eyes and not in the touching way.

I beg Whitney and her mentor Clive Davis to get Whitney the vocal lessons that she desperately needs. Her breathing control is awful on fast songs and you can barely recognize her classic song, “I Wanna Dance with Somebody”.

I’ll always love Whitney but keep singing like that, I don’t think everyone else will.
Posted by afreshmusic at 9:43 AM

Email ThisBlogThis!Share to TwitterShare to FacebookShare to Pinterest
Tags: Comeback, dancing with the stars, I Look To You, Voice, Whitney Houston