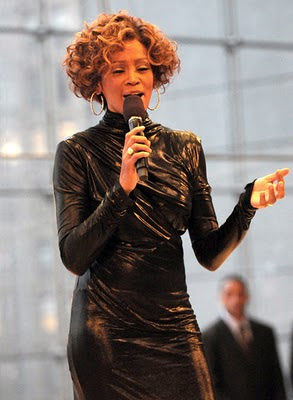 Remember weeks ago when I said that it was clear that Whitney Houston needed vocal lessons? Well, I stick by me saying that and it looks like she is getting the vocal lessons that is badly needed. Whitney performs from a stool and gives a solid and very laid back vocal performance. Listen to the tone!!! That's the tone from the late 90's and not the tone that was recorded on her Platinum selling comeback album "I Look To You".
While I'm talking about the "I Look To You" album, I want to say that I am very disappointed in the Grammy voters. Whitney Houston has been shut out of the awards, getting no nominations. That is a huge mistake because while the voice on the album isn't the voice we have all come to know, the album is very good. The production is damn near flawless and the delivery soulful.
I'm just happy to see that Whitney Houston voice is coming back too!
Posted by afreshmusic at 7:52 PM