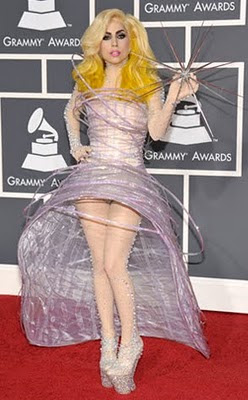 Lady Gaga open the 2010 Grammy Award show with an amazing performance and a duet with Sir Elton John on dueling pianos. I now call Lady Gaga “The Gaga”. She’s amazing and the future of Pop music. You can quote me on that!
I was wondering if Beyonce could match The Gaga and it proved that she couldn’t. Beyonce didn’t give a Sasha Fierce performance but just a Beyonce performance. She was more focus on trying to showcase her vocals. Which I never have a problem with a singer trying to showcase their vocals but the problem is that Beyonce can’t sing. She can dance, look pretty and make amazingly catchy songs but singing is not her strong point. Beyonce was a disappointment even to many of her fans who expected to hear Song of the Year “Single Ladies” but instead we heard “If I Were A Boy”.

The Michael Jackson tribute was amazing with Jennifer Hudson, Smokey Robinson, Celine Dion, and Carrie Underwood. I had my 3D glasses and the video was cool and yes it was really 3D. They created a duet with Michael Jackson because his voice was piped in and it made for a very emotional performance. American Idol is often citizen for trying to make instant celebrities but I think Jennifer Hudson and Carrie Underwood proved that there are some extraordinary voices that pass through American Idol.

Jamie Foxx, T-Pain and Slash performed “Blame It” and also tore up the stage. I thought the best part was Jamie Foxx bring his Half Sister who has Down-syndrome on the stage to dance. Just so you know she had rhythm and was really shaking her pony tail. I think she gave the show that many people wanted Beyonce to give.ha!

Mary J Blige and Andrea Bocelli’s performance of Simon and Garfunkel’s Bridge over Troubled Water was a showstopper. The Soul Singer and a Classical singer tore the house down. Mary J Blige put that Gospel flavor on it while Andrea reached for the operatic notes and boy could he hold on to a note.

Maxwell performed Pretty Wings. While he put on a solid performance he seemed to have problems with his voice. Mainly his falsetto wasn’t there but he did some Teddy Pendergrass type growls and pulled out a hell of a performance. Robert Flack joined him on stage for a performance of “Where is the Love” and she’s a legend but whoever did her makeup is so damn wrong! They had her looking like a clown, def. not fitting for a 72 year old Soul legend.

Beyonce won a total of 6 awards and putting her total count of Grammys to 13! The record of 6 in a night puts her in company with Eric Clapton, and Quincy Jones. You tell me if Grammys have gone Pop?

Lil Wayne, Drake, and Eminem also performed but most of it was blanked out. Travis Barker played drums on the performance.

Black Eyed Peas performed and they had dancing robots. They also welcomed us to the “Future” 2010 but isn’t this….

Pink performed but it was nothing special since she does the same performance every award show this year. She was damn near naked though.

Jennifer Lopez body doesn’t look good anymore. It isn’t bad but those twins she had totally screwed up the hour glass shape that she was known for.
Posted by afreshmusic at 10:33 PM