Kings Go Forth - One Day - Sex to the Ears 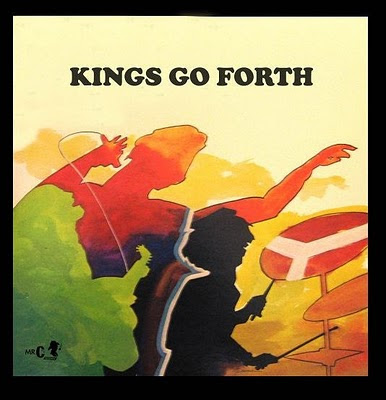 Funk is Still Alive with Kings Go Forth
They are funky, really funky and my ears are so very happy. I got an email saying check out this group (Yes I check my email and listen to music people send me). Of course if I don’t like it I usually just ignore it and turn on some Aretha Franklin to make my ears feel better. Well after listening to Kings Go Forth, I don’t have to do that.

Their sound is reminiscent of Curtis Mayfield with the falsetto lead singer and blaring horns sounding like 1960’s Chicago Soul. The drummer must be one stinky bastard because he putting the stank on them suckers! They are currently signed to a small label Luaka Bop founded back in 1988. Sounds like something Daptone Records would put out but the production is rawer than anything I’ve heard from Daptone (Minus the Como Project). The band is tight and the voice is soulful but it is all very raw and that’s what makes it so FUNKY. If James Brown and Curtis Mayfield ever did a duet I would imagine it would sound something like this. Their debut album was released January 12, 2010. If the rest of their music sounds like this, I might have to buy 3 copies: One for the house, one for the car and one for my Funk loving dad.

Listen for yourself! Kings Go Forth – One Day

Check them out HERE and post a comment tell me what you think.
Posted by afreshmusic at 4:55 PM