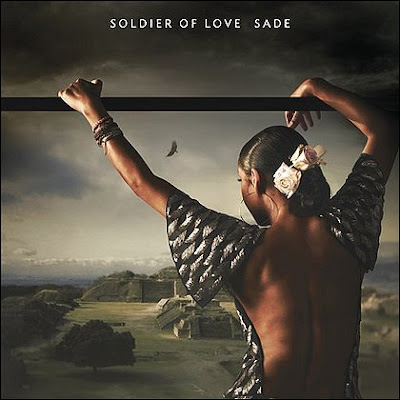 Before I purchased Sade’s new album “Soldier of Love”, I asked my followers on twitter what they thought. Overall the reviews were very positive but I was still worried because they all admitted that they were big Sade fans. Especially with the one woman saying “It’s Sade, does it matter, can it really be bad?” After several replies saying that the album was good, I asked if it was better than the single, YES! That’s what one of my followers said. I gave it a listen and this is what I think:
The very first track on “Soldier of Love” sucked me into Sade’s world. Sade lives in a world of heartbreak and desire. “The Moon and The Sky” is a classic Sade track but with a contemporary sound and it’s refreshing. Sade isn’t ever going to belt out a song like Whitney or Mariah but she’s more of a crooner almost like the female contemporary of Smokey Robinson. She croons “You’ll always know the reason why this love ain’t going to let you go”.
I wasn’t crazy about the first single “Soldier of Love” but it works for the album because it keeps you in her world but it has a more upbeat sound. It keeps you from jumping out the window. She croons “I have the will to survive.” Oh ok, so you’ve been beat down by love but you’ll survive. I think I understand the song better in album form rather than single form.

“Babyfather” is something more of my speed. It embraces a more contemporary sound and is a more upbeat and positive song. “For you your daddy is the best he can be”. She sings about how a father is the best he can be for his child. It is one of my favorites on the disc!

“Long Hard Road” is back to classic Sade.
“Be That Easy” is classic Sade but with a nice acoustic guitar and smooth background. It has a John Mayer/Corinne Bailey Rae feel to it. One of those tracks that make you appreciate Sade as the blueprint for Corrine Bailey Rae.

“Bring Me Home” isn’t anything to write home about.

“In Another Time” is a song that draws you back into Sade’s world. Her lush vocals and great band goes to work.

“Skin” is Sade trying to wash someone “off her skin”? I’m not that deep, I don’t get it.

“The Safest Place” is the disc ending. Back to the classic Sade sound.

To sum the album up: If you are a Sade fan you will love it because it’s similar to all her other albums and it’s been 10 years since new material. If you are a person that never liked Sade music, you’re still not going to like her. If you are too young to have really been a fan of Sade, you might like her if you listen to India Arie, Corinne Bailey Rae, John Mayer, Norah Jones or Vanessa Carlton.
Take A LISTEN TO THE ALBUM
Posted by afreshmusic at 7:10 PM