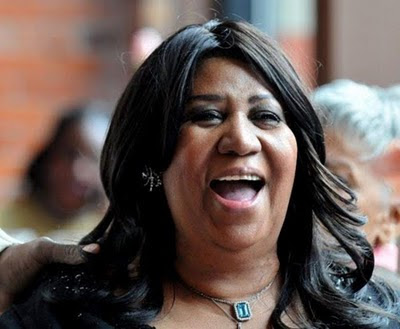 Most 67 year-old grandmothers would be retired and at home but not the Queen of Soul, Aretha Franklin. The legendary trail blazer Aretha Franklin is preparing for her album release on her record label Aretha Records. Aretha: A Woman Falling out of Love is expected to be release the last month of March (2010). This will be her second album without the backing of a major record label (The first being “This Christmas Aretha”). This will also mark the first album on her Aretha Records label.
Aretha offered a preview Friday of several songs from her forthcoming album, "Aretha: A Woman Falling out of Love," in a downtown Detroit restaurant. She wrote and produced a few of the songs and is executive producer of the album.
Aretha, who will turn 68 on March 25, said the CD features musical styles from funky blues to jazz to a sizzling hot recitation by actor Billy Dee Williams. There's also a stirring rendition of the gospel classic "His Eye Is On the Sparrow," sung by her son, Eddie Franklin.
Aretha Says:

"You fall in love, you fall out of love. These are some of the things that women go through," she said. "You think you want something, you get it, and then you decide it is not what you wanted after all. You don't always want what you think you want."

Posted by afreshmusic at 3:48 PM