A Celebration of Life Fit for The Queen: Albertina Walker's memorial & funeral [VIDEO] 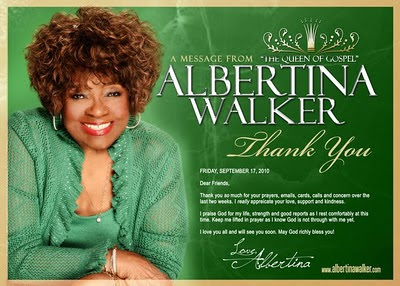 The who’s who of Gospel, Chicago and much of America came out to celebrate and say goodbye to the Queen of Gospel, Albertina Walker. Shirley Caesar, Tramaine Hawkins, Angela Spivey, Bobby Jones, Joe Ligon of The Mighty Clouds of Joy, The Chicago Mass Choir, The Barrett Sisters and many more performed tributes to the late Albertina Walker at her Musical Memorial.


First Lady of Gospel, Shirley Caesar and The Caravans sang for their mentor at the funeral. Yolanda also delivered a song paying respect to a woman that opened many doors. The Queen of Soul Aretha Franklin topped it off with a performance ’sanging’ “I’ll Fly Away” with much passion.

“Michelle and I are saddened by the passing of gospel great Albertina Walker. Growing up on the South Side of Chicago, she started singing in her church youth choir at just 4 years old where she learned to spread the ‘Good News’ through song. She also performed before President Bill Clinton and was honored at the White House by President George W. Bush for her contributions to Gospel music. And she never forgot to give back, impacting her community through the Albertina Walker Scholarship Fund and many other charitable endeavors.”


“Ms. Walker’s voice and message has touched congregations across the nation. Though we have lost an American icon, her influence on gospel music will continue for generations. Our thoughts and prayers are with her family and the countless lives she touched.”
Posted by afreshmusic at 4:18 PM