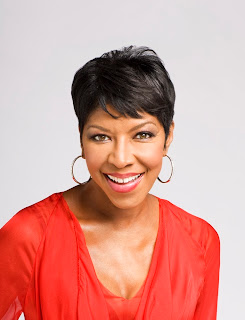 , the woman can straight blow! She was one of many that was marketed as the "new Aretha

" well she never quite became that because Aretha just can't be replaced. Natalie even acknowledge that Aretha would sing circles around her in a Jet article. She once was compared to Diana Ross

but quickly pointed out that she sings way better than Diana. You got to love this Soul Diva! Music is just in her blood...her father is the King, Nat King Cole

A reader of this blog suggested that Natalie Cole's breakdown around 2:33 in "Our Love

" could possibly be considered a "Rap". I think that's a little far off especially the 1977 recorded version that reminds me more of an updated swing reminisces of Ella Fitzgerald

on Mack the Knife live in Berlin

Back to this great video. This is Natalie Cole live at Sinbad's music festival. Her vocals is outstanding, the band is grooving but the background vocals are a little weak. I'm going to need those ladies to step their game up. I guess everyone can't have superstar background vocalists like: Chaka Khan

Posted by afreshmusic at 6:22 AM