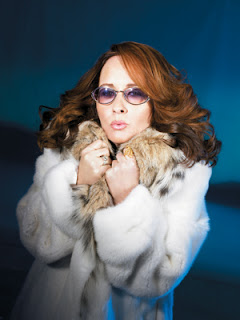 has died at the age of 54. She died Sunday, December 26 in her home. About a month after suffering a seizure.

Teena Marie was not a white girl singing soul but she was a woman that was soulful and happened to be white. From her classic crooner ballads: (Déjà vu (I’ve Been Here Before), Out On A Limb, Young Love, and If I Were A Bell to her funky mid and up-tempo songs: Square Biz, It Must Be Magic, Ooo La, La, La, and Lovergirl

Known as Lady T to her fans, she was a dynamite performer and all around artist. She wrote, produced, played multiple instruments and boy could she sing. The woman could straight blow! She basically was the female Prince

. I’m sure she would have appreciated being the female version of Rick James

who was her musical mentor. However, in this case the student out mastered the teacher. She croon like Smokey Robinson

and could break into a funky Marvin Gaye

beat like no one else. Just listen to her tribute to Marvin Gaye “My Dear Mr. Gay

e” from her Starchild album. She croons in a Smokey like voice except delivering the passionate lyrics like only she could and then she slips into a Marvin Gaye style funk track before you know it. That is a small piece of the talent that she possessed as an artist.

Another part of her greatness was her knowledge of music. Not only did she have knowledge but she also had a deep respect for the past. Just five days ago I had a short conversation with her on twitter. She didn’t understand the use of the Marvin Gaye & Tammi Terrell

sample of “Your Precious Love

” for a song about Cornbread and Greens

. I at first didn’t agree but I had to concede my point of view because she was well of course correct. We came to an agreement that it wasn’t the best use for that classic song.

Her death came as a huge surprise to me and it still is. Especially since I was just holding a conversation with her 5 days from her passing. She seemed upbeat about her future and her daughters upcoming birthday. The Fresh Music Page sends our thoughts and prayers to Teena Marie’s daughter Alia Rose, the rest of her family, friends and fans.
Posted by afreshmusic at 4:59 AM