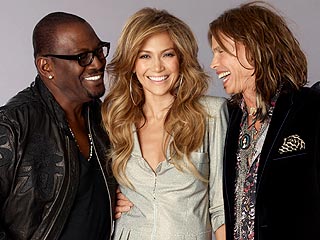 , weird white guy with the English accent, who is also a tell it like it is asshole Simon Cowell

, and only black guy at the party Randy…oh wait you’re still here. Goodbye kind of cute songwriter that nobody knows Kara DioGuardi

? What the hell was Ellen doing there any way? They all are gone and I really miss Simon and Paula. I miss Simon more than I miss Paula though (I get to see her on her new dance show “Live to Dance”).

. Jennifer Lopez remembers her but Randy Jackson who was actually there have no memory of her at all. She has a quality to her voice that caught my opinionated ear. She made it through.

Second guy singing Hallelujah I love her so by Ray Charles

was horrible but they let him through because they enjoyed his “performance”.

Third girl is Kenzie a 15 year old that go to a performance arts school. She has a mature voice that cracked when she went for the big notes. Randy didn’t like her but Jennifer Lopez pushed for her. She went through.

Oh great the first fool we get is this chick from the Ivory Coast. To her credit she had beautiful skin. It was Jennifer Lopez first time saying no and it was hard for her. I think all the blood rushed from her face when it was time for the judgment: Made me actually feel a little uncomfortable when she had to say. This never happen when Simon would tear into someone.

A Jersey girl looking like she’s Snooki from the Jersey Shore. She did have nice breast to give her a little credit. She was weird but she had a decent voice when she decided to calm down a little and sing a little Celine Dion song. They let her through but of course they would with two guys on the panel.

Bring in the nut jobs to entertain us and then focus on Jennifer Lopez having a hard time saying no. Ok, Idol producers we get it. You’re playing with your new toy and that new toy is Jennifer Lopez.

The American Idol producers are back at it. Now they are playing with their other new toy and its name is Steven Tyler. Oh yea go on his love for the sexy ladies, this is entertaining! *sarcasm*.
Who the hell was the serial killer looking guy that sang Proud Mary

and then belted out “I’m Here

Next is a crazy Britney Spears fan with a dramatic spin on whatever in the hell she sang. She was very show tunes type singer but she was like a comedian. Unfortunately she wasn’t joking but Jennifer Lopez bought into it. She was sent to Hollywood on the yes of Jennifer Lopez and Steven Tyler. Randy basically said “hell no”.

The 16 year old with the country twang in her speaking voice creeped me out. She was cute but creepy as hell. This girl was a true “Southern Belle”. She had a good voice but it was extremely messy and all over the place. Jennifer Lopez instantly says yes and Randy Jackson follows with a Yes. She was a really sweet girl by the way. Hopefully she finds a great country ballad and sings that sucker!

A war Refugee is next with a sad story of course! American Idol producers really put it on thick because she was also attractive. Had the R&B flavor, attractiveness and similar story to 3rd season contestant Leah Labelle! She made it through.

A singing waitress that serves burgers and milkshakes is up next. She decided to sing “God Bless The Child” and even decided to scat a little bit. She reminds me of Katherine McPhee but she wasn’t as talented or appealing.

Is this our first American Idol contestant that is also a Ninja? He’s from Japan and has been imitating Michael Jackson since before he was born. He decided to sing Miley Cyrus “Party in the USA”. It was funny and I just had to mention it. That was like a slice of classic American Idol especially when they went to all the contestants singing that same song horribly.

The season of the little white girl singers: her dad is a former doo-wop singer who survived throat cancer. She could sing but sound like she should have been singing the love boat theme song. She had some sweet moments when she toned her voice down. She made it through to Hollywood.

Some guy with some I want to be cool black frame glasses and a very nice pop voice but I was bored as hell by this time. He made it through by the way.

Tomorrow’s blog will be about what I think about the group dynamic.
Posted by afreshmusic at 9:11 PM