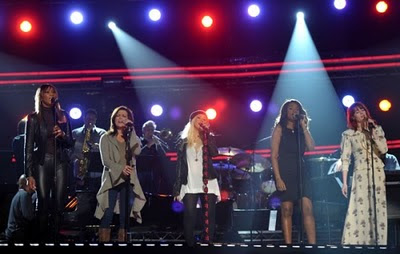 Yolanda, Martina, Christina, Jennifer, Florence rehearsing
Christina Aguilera redeemed herself and almost stole the show if it wasn’t for the Gospel Soul voice of Yolanda Adams. Whoever said music is not a competition never put 5 divas on one stage. You have Christina Aguilera, Yolanda Adams, Jennifer Hudson, Martina McBride, and Florence Welch: ok maybe Florence Welch isn’t a diva but you get what I’m saying.

This is the rankings of performance:

who took on the Aretha Franklin written classic “Ain’t No Way”
2. Yolanda Adams

who took us to church with the Aretha Franklin written classic “Spirit in the Dark”.
3. Jennifer Hudson

who did the Stevie Wonder written Aretha Franklin hit “Until You Come Back to Me”
5. Florence Welch

Christina Aguilera showed her range on “Ain’t No Way” soaring to Minnie Riperton highs. Her voice was really on point, she didn’t over sing and she remembered all the lyrics. Yolanda Adams is a Gospel star but she has one of the greatest voices in current music period. She works her alto like nobody business, taking us straight to church with her Gospel growls and moans on “Spirit in the Dark”. Jennifer Hudson was just ok starting “Respect” a little too high but still she worked with it. Jennifer Hudson did sing Aretha’s signature song. Which is something that well you just should never do, you just don’t touch anybody signature song. However, Jennifer Hudson went American Idol on us at the end and delivered one of those “Glory Notes” that made you realize that she has a powerful chill inducing voice. Martina McBride showed her Country Soul but let’s be honest she was out of her element. Florence Welch wasn’t good at all. She did get a glory note but her performance sounded like she was at Karaoke. Her diva card gets rejected.

What did you think Fresh people? Did I hit the mark with my review?
Posted by afreshmusic at 7:39 PM