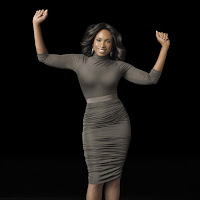 Two outstanding modern voices Jennifer Hudson and Christina has been tapped by the Grammy's to honor the Queen of Soul, Aretha Franklin. Aretha Franklin will not be in attendance but she has taped a video message.

The legendary Aretha Franklin has made recent news with reports of a illness that has never been confirmed. Although most (including this blog) has said it was Pancreatic Cancer, Aretha has denied that claim. What is confirmed is that a surgery was confirmed and she deemed them successful.

Aretha Franklin and the Grammy's have a long history. Aretha has won 18 competitive Grammy awards and have been honored with 2 special Grammy awards. She has the most Grammy awards of any R&B singer, African American woman, and holds the record for most Best Female R&B Vocal Performance awards with eleven.

Aretha Franklin first Grammy award came in 1968 for the song Respect and her last Grammy was awarded in 2008 for "Never Gonna Break My Faith" a duet with Mary J. Blige. Aretha Franklin and Ron Isley are nominated this year for their duet "You Got A Friend".
Posted by afreshmusic at 3:23 PM