My Views On Music & Life by Demetrius afreshmusic Williams Part 2 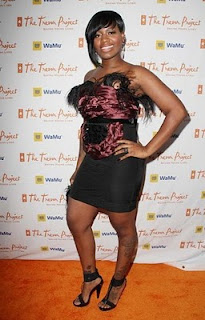 wins a Grammy but pulls a Diva move. Fantasia won her first Grammy for her hit song "Bittersweet" but wasn't there to accept the award. Why? Well because she felt that she should have been apart of the Grammy tribute to Aretha Franklin. That's a pure Diva move and I LOVE IT!

is working on a new album. She said it's a mix between Aretha Franklin, Prince, and Radiohead? I'm hoping that the Aretha Franklin and Prince inspired songs will bring her back to the R&B type material like "The Trouble With Love Is" from her first album. I love Kelly Clarkson but this Pop Rock stuff is hard for me to listen too. Glad to see Kelly is giving us something new! Reinvent yourself!

Jennifer Hudson gets out sung at the Grammy's? Yes she did, Christina Aguilera and Yolanda Adams were both too hot to handle. We love Jennifer for her grounded attitude but I think we all want a little more Diva on stage. Come on Jennifer you have this big powerful church gal voice and you need to make your presence known on stage. Don't forget that this is Show BUSINESS, your replacement is around the corner. With that said I can't until her new album "I Remember Me

Billy Ray Cyrus is afraid for Miley Cyrus? Sounds more like a jealous man than a scared father. He claims that "Hannah Montana" show destroyed his family. Obviously his family was never too strong because my father would have just whooped my ass and any handlers ass too if they tried to get in the way. That's real talk people. Let somebody attempted to move my parents out the picture where they couldn't have done proper parenting. HA!

I am loving the new show Chicago Code with Jennifer Beals. This show is strictly fictional because the REAL Chicago would never let a black man have that much power. Harold Washington was Mayor of Chicago and he didn't have that much power that Alderman Gibbons (Delroy Lindo) have.

I'm also loving Harry's Law with Kathy Bates as lead character Harry. Kathy Bates is one of my favorite actresses and she's funny as hell in this show. You should check it out.

fans were upset but hey you must deal with it. They are popular but she's more talented.

While I'm on the Grammy's: I see the Grammy producers were sending a message of excellence. Look at all the legendary people that performed on the show. A tribute to Aretha Franklin by some great voices to start off excellence. Bob Dylan

, and Barbara Streisand all performed. Those are legendary names indeed.
Posted by afreshmusic at 10:19 AM