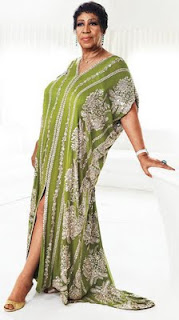 The Queen is alive and make no mistake the woman still reigns on her Soul Throne! Aretha Franklin who several a months ago had a serious undisclosed surgery. Miss Franklin or Queen Franklin looks mighty well. Aretha looks so much more healthier now than before.

The Queen who is 68 belted out her #1 Pop & R&B hit RESPECT on The View. Aretha moved more than I've seen her do in year on her performance and you could tell she was trying to really sock it to you. She was letting you know that at 68, she still GOT IT! Check it out for yourself and tell me what you think. By the way Aretha Franklin

is set to release a new album next month via Walmart.

Posted by afreshmusic at 6:21 PM