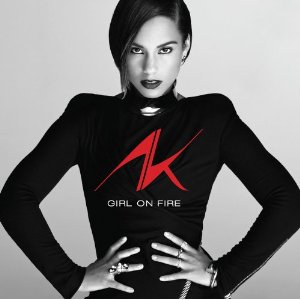 After one listen to Alicia Keys newest offering of music “Girl on Fire”, you’ll see there is something new. Alicia has mostly abandoned her SOUL that was on her first outing “Songs in A Minor”.  It seems like on this album Alicia is in a battle with either herself or her record label.

Alicia starts strong with “Brand New” but seems to give in to the pressures of the industry. You’ll find her voice in a sultry coo over dance beats. “When it’s All Over” starts strong with an interesting drum but the backing beat is like a musical Circus and not in a good way. It’s layered and is serving no point.

The title track “Girl on Fire” is the best track and the album seems to improve after that. Unfortunately at that point you’re halfway through the album. Although the Nicki Minaj version could have been left all or saved for the last track.

The duet (Fire We Make) that pairs Keys with Maxwell is nice. It seems to be one of the few songs Alicia has made in recent years that fit her voice. It’s not a vocally demanding song for either artist. Maxwell carries his weight because he’s an extremely talented singer. Unfortunately nobody on this song really gets to cut up. It gives a sultry soul. You could have easily replaced Alicia Keys with Anita Baker (It might be better with Anita).

You’ll like this album if you are a big fan of the state of current music or you’re a really big Keys fan.

If you’re not either; I would wait until it’s in the Best Buy $4.99 section. This girl isn’t on fire more like a girl simmering.