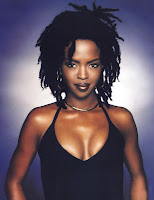 It's nothing like court ordered music. Lauryn Hill is back to the music game via Court order. After one listen to "Neurotic Society (Compulsory Mix), I instantly thought of Marvin Gaye's "Here, My Dear". It was released under a similar circumstance, Marvin had to pay his ex wife Anna Gord after their divorce. He gave half of his royalties to her.

Lauryn Hill owes the government and therefore we fans win with new music from her. Just like the Marvin Gaye album I believe that most fans of Hill will say the new music is garbage and confusing and just like the Gaye album after 20 years people will come around and realize how great the songs are.

Posted by afreshmusic at 9:36 PM