Pauline Shivers (born ) was born to George Shivers and Rosa Lee (nee James) Shivers in   She was the third oldest of eleven siblings.  Pauline was raised in both and where she would find success as a performer in many of the popular clubs on the north side of and later find minor success as a recording artist.

Pauline Shivers married Booker T. Hodges in November of 1952 and that marriage would produce one daughter, Catherine Hodges who died in a car accident in 1969.  After a short marriage Pauline would go on to meet and marry “Birdlegs” Banks in May of 1960.

Before she married , Pauline was already known to many on ’s North Side for her outstanding voice. was a popular singer on the South side of . They would soon be known as Birdlegs & Pauline after a friend suggested they sing together. Birdlegs & Pauline recorded their first single in 1963 and that would go on to be their greatest success. The song was named “Spring” and in June of 1963 billboard named it a “Regional Breakout Single”. With Veejay Records handling the promotion for the small label (Cuca), Birdlegs & Pauline would find charting success.  “Spring” would go on and be a National Charter on billboard magazine. The song peaked at number 18 and stayed on the billboard chart for 8 weeks. 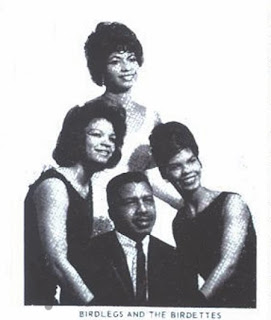 With the success of their national charting single they would go on and perform on the same stages as BB King, and Ike & Tina Turner. Birdlegs & Pauline would also release an album on the Cuca label.  Unfortunately by the time the album was released in 1964, there was little interest in the group.  Still Billboard would go on and give the album three stars.

After her divorce from “Birdlegs” Banks, Pauline would continue her music career.  Pauline would team up with Syl Johnson as part of a feature vocalist in his Syl Johnson Revue in 1965.  She would go on and record for Opex/Expo labels and was still a popular draw in the club scene of Chicago. She recorded with Bobby Jones (sometimes credited as Bobby Jonz) on the Expo/Opex label. “No Messin Around” credited as Pauline & Bobby which was more of a hard soul type song. She would also release solo singles like “Tell Him No” and the very popular “Won’t You Come Back Home”. While none of her later records could ever replace the immortal “Spring” these recordings helped keep her on the local scene.

Pauline would later leave popular music and find regular employment.  Pauline Shivers-Goggins went on to become a dedicated member of her church where she served as an outstanding soloist and youth choir director at in until her death in 1997.  Even though she left show business many years ago, Pauline was always known as the entertainer in the family. Whether it was just a family get together, a funeral or a church event, Pauline was there to sing. When it came time for her funeral, she even sang at her own funeral! Of course thanks to the power of recorded music.